Little did I realise that soon I would carry the torch… could I ever be ready for this?

But as of that morning, the torch is now in hand. Along with it, the responsibility for carrying its flame.

…In coming to terms with this transition, I think of how a torch (or baton) changes hands in a relay. 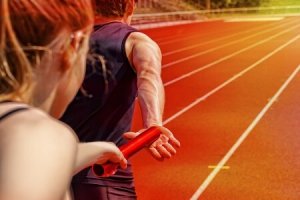 Have you ever watched the transition point in a relay?

One runner runs with all their might, carrying the baton to the next runner… as the first runner approaches, the second runner starts to jog forward in anticipation. There are a few metres where they both run together, the first runner with the final push to end their journey. The second, builds momentum to take that journey further.

Although it was known all along that the baton would change hands, one can only prepare so much.
The first touch of the baton still hits with a jolt of realisation. This is real, it’s time to grasp the responsibility and run with it. The first runner has finished their journey and the second runner must now accelerate.

And so, just like the relay, I too found myself at a transition point. My jolt of realisation came as I walked through the door…

The day it happened…

Getting ready for work, while the kids got ready for school and then… I got the call.

My mother, hadn’t answered the door when they came to pick her up for her appointment at the hospital.

…had a I heard from her? Had she found another way there?

As I rushed to the car and drove to her house, I hoped for something different, but that was not to be… she had finished her race through the night. Amid the pain of goodbye, now was the realisation that the torch had been handed over. 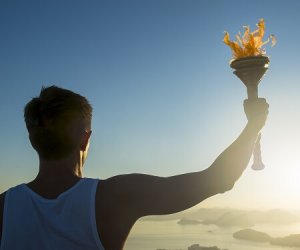 The torch I now carry

It is a profound privilege to carry the torch I do.

The transition isn’t easy, but necessary. Our family carries a heritage, standing on the shoulders of giants. Great parents, together again, who now cheer us on from the other side of eternity.

This is a torch of encouragement, faith, hope and determination to make this world a better place. It has been carried to such a high standard, had I not run alongside the previous runner, I would not have thought it possible to do so.

This is now that torch I carry.

Do you carry a torch?

Is there a torch that you’re carrying? Or perhaps one you will carry in future?

It may be a heritage from a parent or mentor. It could be your role at work, perhaps a recent promotion.

Is it in your marriage, the children you raise, a community project, business or something else?

Whatever your torch, there is no mistaking the realisation of responsibility once awakened to it. In facing this realisation, I gathered some thoughts on how best to run with a torch. In the hope that they will provide encouragement for other torch carriers, they are as follows…

Whatever your torch, there is no mistaking the realisation of responsibility once awakened to it.

Keys to carrying your torch

#1 – Realise it is a privilege

You may or may not like the way you were given your torch, or that you carry it all… but you do. Carrying a torch is a privilege. The greater the torch, the more likely it is that you will feel underprepared to carry it. However, understanding that it is a privilege and it has been entrusted to you can create a positive catalyst for growth.

#2 – You didn’t light the flame, but you can carry it in the same direction

Before carrying a torch, you may have enjoyed it’s light for many years. It was burning before it became yours to carry.

Prior to a promotion at work, the previous manager may have taken care of responsibilities that are now yours. Or you may have had a family member who kept everyone together and organised your gatherings. It is likely that these tasks did not originate with you, and doing them at first can seem daunting.

More importantly than doing these things, is understanding the reason they need to be done. Knowing the goal or direction, will help you work out what needs to be preserved to keep the torch burning.

You will likely carry the torch a little differently to the last person, but you can keep it moving in the direction it needs to go.

Sure, there are times you may feel like hiding. However, hiding under a blanket is not the way to carry a torch. The torch was never lit so that you could try and hide it.

Whether it’s leading by example, committing to learning new skills, or just finding a way to get things done. Take the steps and take them head on.

If you’re on the track, with torch in hand, run with it not from it!

#4 – There will be spectators, supporters and commentators

How easy it is to comment from the sidelines. There will be those who take that opportunity. They may be supportive or critical.

Whatever they do or say, it’s not their race, they are not the one carrying the torch.

Draw encouragement from those who support and ignore the critics (or just prove them wrong). The critics will never share your joy and satisfaction for the wins you experience.

Going for the prize

Whatever torch you have the privilege to carry, may you have the grace, faith, strength and stamina to carry it well.

To those torch carriers who are no longer with us, thanks for the legacy, your flame still burns bright.

Bridging the gap to unlock your potential

What to do when you’re overqualified